Covid-19: a pandemic of conspiracy theories

The conspiracy theories that arise alongside epidemics are not harmless.

The Covid-19 public health crisis is accompanied by another epidemic: that of fake news, rumors and conspiracy theories related to the disease. While quarantines have slowed the progress of the viral epidemic, it cannot stop the flood of false information. These reach us directly in our homes, brought about by the Internet and social networks.

Covid-19: a pandemic of conspiracy theories

Conspiracy Watch has created a map indicating the place of origin of some of the wildest conspiracy theories surrounding the Covid-19 pandemic (https://www.conspiracywatch.info/la-carte-des-theories-du-complot-sur-le-coronavirus.html). One glance at the map is enough to understand that the conspiracy epidemic is global. 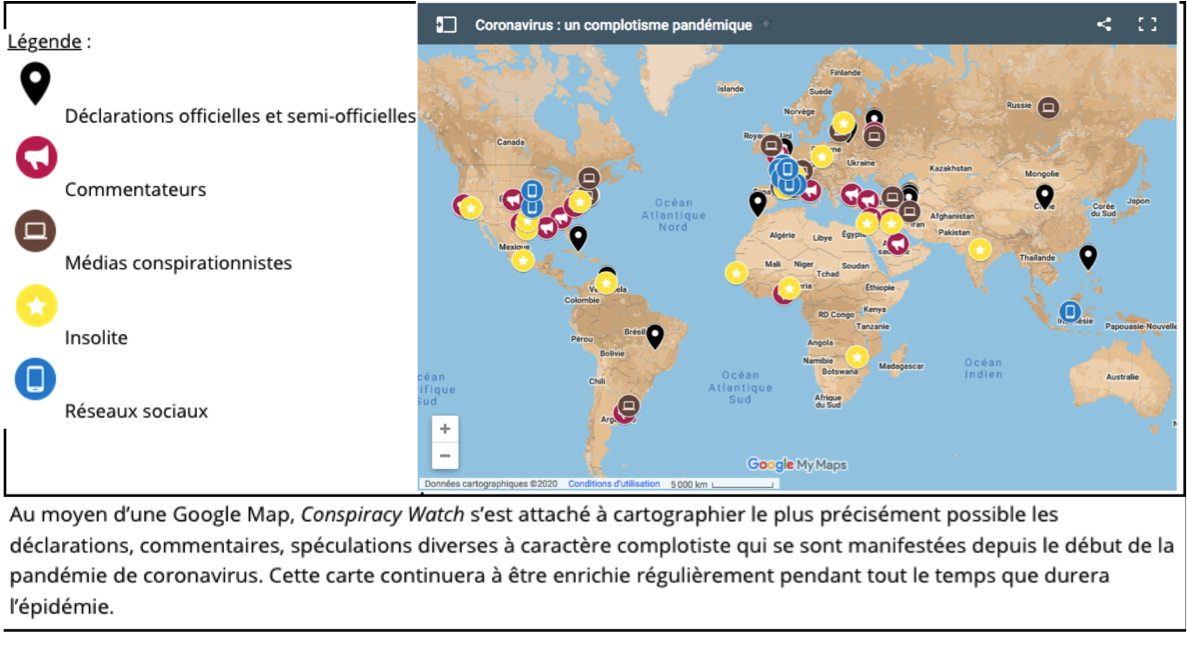 Among these conspiracy theories, some insist that Covid-19 simply does not exist. They claim that governments around the world have secretly agreed to make people believe in its existence, so as to legitimize the implementation of measures restricting individual freedoms.

Among these conspiracy theories, some insist that Covid-19 simply does not exist. They claim that governments around the world have secretly agreed to make people believe in its existence, so as to legitimize the implementation of measures restricting individual freedoms.

Other conspiracy theories maintain that Covid-19 was created in a laboratory, or that governments and the pharmaceutical industry are downplaying the effectiveness of inexpensive drugs in order to soon bring a pre-prepared vaccine to the market at a high price.

A sense of fear and helplessness

The conspiratorial outbreak that accompanied the Covid-19 pandemic came as no surprise. Indeed, past epidemics (plagues, Zika, Ebola, ...) have all given rise to a multitude of rumors regarding their supposedly intentional and malicious origins.

This is partly explained by the fact that epidemics cause a great deal of concern among the population. In addition to the fear of the disease itself, there is also a sense of helplessness. How can we confront an invisible threat?

This mental state, combining anxiety with a feeling of helplessness, is known to foster belief in conspiracy theories 1. Indeed, conspiracy theories make it possible to put a face on the threat: that of the malicious individuals who are allegedly responsible for the situation. They also give the illusion of being able to act to counter the danger. For example, by refusing to follow the government's recommendations, which are suspected of intentionally encouraging the epidemic. We therefore see that certain conspiracy theories can prove to be quite dangerous during a pandemic.

The example of Zika

This same phenomenon was observed with the Zika virus epidemic in Brazil in 2015-2016. This virus, transmitted by a mosquito, can cause malformations of the fetus when it infects pregnant women. A conspiracy theory quickly emerged alongside the disease: these malformations would not actually be caused by the virus, but by an insecticide mixed with water meant to limit the proliferation of mosquitoes. The authorities and the company producing the insecticide in question are said to have invented the story of a virus causing fetal malformations to cover up this public health scandal.

It is now thought that this conspiracy theory likely aggravated the Zika epidemic in Brazil. Indeed, those who believed in it were less willing to take protective measures against mosquito bites since, in their view, insects were not the source of the danger (Carey et al. (2020). The effects of corrective information about disease epidemics and outbreaks: Evidence from Zika and yellow fever in Brazil. Science Advances, 6(5).)). These individuals thus became themselves unwitting transmitters of the virus, which facilitated its diffusion throughout the country.

A matter of trust

While some conspiracy theories can have serious consequences during an epidemic, it is difficult to control their proliferation. Communicating correct information to the population does not always suffice to counteract these dangerous beliefs (Carey et al. (2020).)). Since the threat of the disease is invisible, people must blindly place their trust in the authorities to adopt the recommended safety measures.

Such a level of trust is obviously difficult to attain if the population has the impression - correctly or otherwise - that its authorities are incompetent, or even corrupt. In France, greater transparency in crisis management processes might perhaps enable the authorities to regain some public trust.

The situation in France

Note: a version of this article was published under another title in issue n° 20 of the magazine Pour l’Eco.